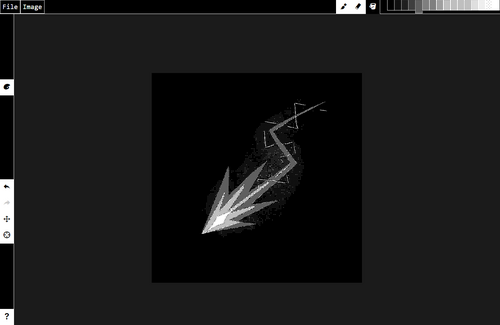 A few weeks ago at the beginning of April, I participated in a game jam where the games were made in HyperCard. It was the first time I'd used HyperCard in many years, and although I didn't particularly care about using it as a game development tool, I thought it was actually a pretty interesting art tool. It only had two colors, supporting other 'colors' via the use of black and white patterns, it only had one step of undo, and didn't have layers. And I found it remarkably freeing to draw in.

So I started working on Strike sort of as an attempt at recreating that kind of feel. It only draws with two colors, with patterns and screentone providing the remaining shades, and an emphasis on drawing pixel lines. Except with more steps of undo / redo, and an autosaving feature because browsers sometimes refresh the page on you (especially on mobile).

I also spent a good deal of time making sure that it'd work on tablets and mobile devices, since I do pretty much all of my drawing on an iPad. I can safely say as a result that it works on iPad (running iOS 13 - I didn't have anything earlier to test on), and it should work on any up-to-date browser on desktop or mobile, but I can't be sure.

Either way, this is where the last few weeks of my development have gone. I've been using this fairly often to do my own sketching, and now I think it's stable enough to share with the world. The app is open sourced on Github and is available both here on itch.io or as a standalone page - the two should be totally equivalent. Strike is also a progressive web app; this means that on mobile (iOS or Android), you can also save it to your homescreen and use it like you would any other app.

Feedback is appreciated, and I'd love to see any art you make with it. If you run into any problems, please create an issue on Github or comment on itch.io. I can't guarantee that I'll add any new features, but I'll at least try to make it as stable as possible.